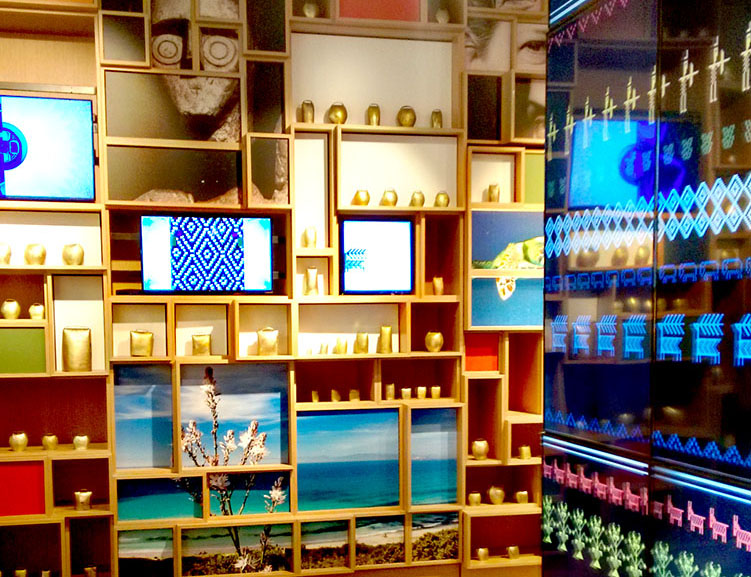 As part of the project we experimented at Expo 2015, the task of designing a family of short films has been a great opportunity to explore the potential of the contemporary language of the moving image.

This part of the project was about designing and producing a set of modular multimedia elements, developed through the exploration of the different languages of cinema, animation, motion graphics. We set out our research effort along two main line of thinking.

Being aware of the overload of visual and environmental stimulation that our World’s Fair visitors would be subjected to, we decided to focus on a few strong key elements. At the same time, we decided to work on the idea of a family of films that, whilst being based on a variety of visual forms and dealing with different themes, could function as individual products, without losing the idea of a common structural matrix.
In order to fit the project organically within our general corporate identity and communication program our films had to meet other requirements.

Firstly the films didn’t have to be perceived as foreign elements, but instead an integral part of the exhibition. It was therefore essential that, in their dynamic and narrative dimension, the shorts connected to the physical exhibits. We also wanted our four short films to become the core of a multimedia library of thematic insights, thought to feed the Expo web platform and to support the project component dealing with social networking.

In this frame of reference, many of the constraints that the pavilion’s physical structure and equipment posed, became elements of strength in the project’s actual development.

To prevent the films’ simultaneous projection in the pavilion’s main hall a crowded environment and informative noise, would generate confusion, we have given the film a common rhythm track. It structured according to a common base, the audio track – created specifically for the project and subsequently declined in four dedicated versions, to accompany each of the four films – has allowed effective interchangeability. At the same time, sharing a common rhythmic score facilitated the modular composition, through installation and commissioning page, the visual components of the film.

The result is that the films can be though as four idents for a common theme. Developed by different work teams on a shared structure, the films present, topics ranging from the quality of food and of the environment, to active longevity and sustainable innovation, treating each one with a specific visual approach. The common structure, the identical duration, the sharing of some elements taken from the general identity project, allow the films to ‘talk’ to each other. The four films, which are ideally associated with different colors (white, black, gray, blue...) end up working like a family of audiovisual products sharing a robust identity. The films hence produce the sense of a visual familiarity. They can either act as a sort of ‘dynamic wallpaper’, that blends quietly in the design of the Pavillion, as well as an integrated media show in which the four pieces can either be seen and enjoyed on their own or as a system working together.